Zephyrhills U15 Girls off to a great start! 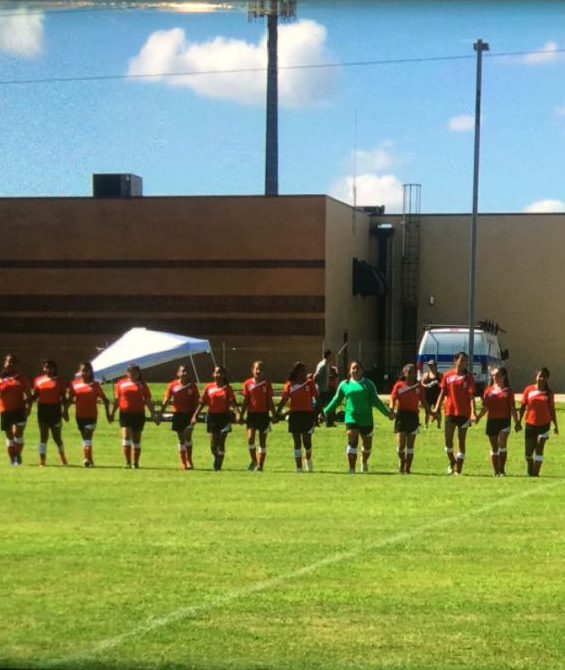 Florida Soccer Club’s Zephryhills Spirit U15 girls got off to an amazing start in their first ever game with a 3-0 win against the Chargers!

The game started off quickly with a powerful shot by Mariana Cardenas into the top corner of the Charger’s goal. The game then settled down and the Chargers tried to push forward but were stopped every time by the defense of Karla Herrera, the outstanding Frida Rodriguez, Jaylene Herrera and Geraldine Moran-Rodriguez. The goalkeeping of Myah Capetta was very rarely called upon.

In the Spirit mid-field, Roxana Meillon and Madison Poe were forever closing the Chargers mid-field down winning tackles and bringing the forwards into play. On the wings, Grace Hoppe and Emma Rhoden were up and down helping the defense and helping the forwards. And up front, the very lively Emily Sutton was always there to pounce on chances made by other Spirit players. Sutton scored a goal ten minutes before the break, and also on the stroke of half-time to take the Spirit into the half-time break with a 3 nil cushion.

In the second half, the game got scrappy with a very frustrated Chargers team being more and more aggressive because they just could not break down Spirit’s spirit. Lizeth Hernandez and Ariana Flores won challenges and stopped the Chargers’ chances, helping it to be an overall Spirit success.

In overall summary, of the first ever FSC’s Zephyrhills Spirit U15 girl’s game, we saw a very passionate, determined team with quality in all areas of the field, and the summer of coaching from Caesar Herrera and Blanca Herrera. Zephyrhills Spirit DOC Gary Blissett was very pleased with the way his team and coaching staff approached their fast game and can see a bright future for soccer in Zephyrhills.